Co-operative children from the age of 5 years can successfully perform spirometry. After first taking a deep breath to total lung capacity the child blows out as hard and fast as possible and then empties his lungs completely. By observing the shape of the curve on the flow volume loop and checking the measurements the doctor can then evaluate what type of disease the child has. Often a bronchodilator like salbutamol is given after the first series of tests to see if there is improvement after the bronchodilator. A positive bronchodilator response test is highly suggestive of asthma.

When the diagnosis of asthma is uncertain an exercise challenge test becomes more important. Young children need to first exercise for 4-6 minutes and then they need to reach their target heart rate within 4 minutes. Spirometry is then done at 5, 10, 15, 20 and 30 minute intervals post exercise. A fall in FeV1 of 15% is indicative of exercise induced bronchoconstriction and suggestive of asthma.

In children younger than 5 years old spirometry often cannot be reliably performed. In this instance an impulse oscillometry test can be performed as it requires less effort and co-operation from the young child than spirometry.

The technique involves sending multiple sound waves generated by a computer-driven loudspeaker to the lungs during normal tidal breathing. Respiratory resistance and respiratory reactance is then measured. These parameters provide information about the mechanical properties of the airway and parenchyma. 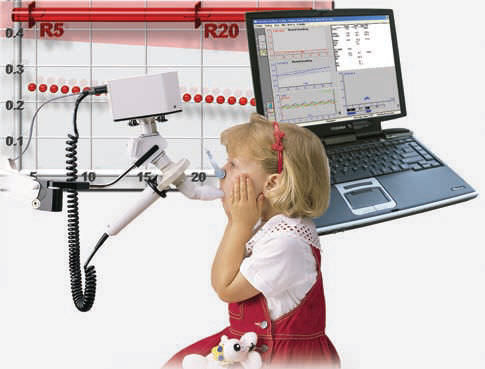